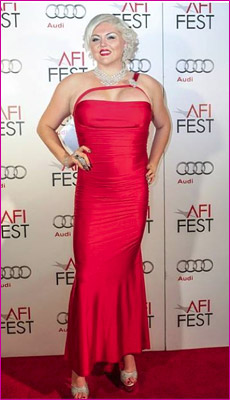 Happy Birthday to my good friend Lindsay Hayward. I've known Lindsay since she was a teenager and we always managed to stay in touch. We almost met in person when I was in Florida and Lindsay was heading back to her native California (from Florida) but sadly it didn't work out. That was a big shame... if you ever want to look up to a woman, she is the ONE.

Lindsay in her own words

My name is Lindsay Kay Hayward and I'm an actress living and working in Los Angeles. I recently completed filming of two feature films, The Internship Games and R100. My role in R100 earned me the Guinness World Record for Tallest Actress in a Leading Role. At 6′ 8 1/4″ tall, I broke the previous record of 6′ 0″ tall, that was held by Margaux Hemingway, Sigourney Weaver, Geena Davis and Brigitte Nielsen.

I was born in Walnut Creek, California on July 28, 1987 and was 6 feet tall by age 9. By age 13, I was 6′9″, but later lost about 3/4″ in height due to a slipped disc. I played high school basketball and received scholarship offers from numerous Division I universities. I attended the University of Virginia for one year, but subsequently left school due to family issues.

In 2008, I was recruited by the Jimmy Snuka school of wrestling in Florida and offered a scholarship to train as a professional wrestler. After a year of training, I was hired by WWE (World Wrestling Entertainment) and cast on their NXT show, a nationally televised pro-wrestling reality show. Although wrestling was fun and challenging, I always viewed it as just a stepping stone to a real acting career. In 2012, I decided to pursue my dream of becoming an actor and moved to Los Angeles. I'm having a blast here in the City of Angels and with two feature films and a national TV commercial under my belt, my career is starting to happen in a big way!

When I'm not busy breaking world records and auditioning for roles, I enjoy playing with my dogs, cooking, wine tasting, going to the movies and dining out in trendy LA restaurants.