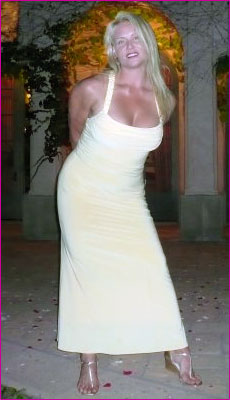 Robin and I have been online friends for some time. She is one of the most impressive women out there. And she is 6'1".

Robin "Hellga" Coleman was one of the stars of NBC's American Gladiators revival and one of the initial 6 women chosen for the show.[1]

Robin's film debut was in 2009 in Tyler Perry's Madea Goes to Jail in the role of Big Sal. She has also worked on Days of Our lives, VIP, etc. She has made guest appearances on Last Call with Carson Daly, Tabatha's Salon Takeover, and Access Hollywood.

Robin is a Meisner Method and Groundlings (improvisational comedy) trained actress, and a member of SAG and AFTRA.

Robin competed in the inaugural World's Strongest Woman in Zambia, Africa in 2001, where she placed third. In 2006, she began competing in figure at the Tournament of Champions, held in Anaheim. In 1997, after 1½ years of serious training, she competed in her first bodybuilding competition, California's Border States, placing first in the novice and second in the open heavyweight division.

Robin is also a competitive rower, with affiliations with Lions Rowing Club and California Yacht Club, both in Marina del Rey. She rows in club 8s and 4s, and Quad, Double, and single sculls. Her single shell is named the 'Equanimity'.