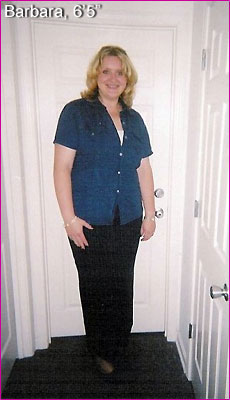 A very Happy Birthday to my good friend Barbara who is 6'5".

Barbara sent me her bio a while back. Here it is:

She was born on November 30, 1975 in Gdansk, Poland. Her parents were young, intelligent and loved each other very much. From the time she was four year-old she was able to write her name and do simple mathematical equations. She learned quickly and looked forward. She was always very energetic and loved playing with cars! Till she began attending first grade she was pretty confident and felt good about herself and her family. But that feeling was shattered when she walked into her classroom.

Her classmates were much smaller, much more open and enthusiastic. She was as tall as boys in fourth grade and much aware of it. The next eight years she spent with the same classmates and the same teachers. While she grew to like her classmates, and they to like her, the teachers were not as pleasant as she would had wished for. The same teachers constantly made fun of her, of her posture and inability to speak in front of a large class. She went blank every time she was asked to come to the board and answer tones of questions about the previously discussed subject. What the teachers did not realize was that she was smart, very smart. She wrote beautifully since she was in second grade; she multiplied four-digit numbers by four-digit number in her head in a split of a second! Only one teacher noticed her gift, but she was afraid to do anything about it. However, the Polish teacher saw a potential in her and pushed her, while other teachers always said that "she would never accomplish anything in her entire life!" She cried... she wanted to be a teacher since she was five, but after eight years of problems and humiliation she thought, "I will never become a teacher; I do not wish to become one of you!"

She was encouraged by her mother to go into her footsteps and become an economist. At that time Gdansk had one excellent finance/economy profiled high schools. She took very difficult exams and was accepted by making one A and one B. She was officially a freshman at Liceum of Economics of Gdansk! Her previous teachers were stunt! They were so upset that they began to spread rumors that she got in because her rich parents paid a lot of money for it. How painful it was to her! But she did not know that the next four years were supposed to turn her life upside down!

When she was fourteen she began to play Basketball. She learned quickly and once again, against all odds, she made it. She was very talented and popular, yet, shy and had low self-esteem. She did not believe in herself, because she thought nobody believed in her. Her high school years were horrible and only Basketball kept her going. In mean time, her parents decided to get divorced. It broke her heart, but at the same time she was happy that never ending fights and arguing would finally end. She worked, she played professional Basketball, she raised her brother, took care of her younger brother, she cooked, she cleaned, but she never heard "thank you", or that she was appreciated. It was quite opposite – she was always the black sheep in the family, unattractive, stupid and lazy. Nobody saw that deep there she was lost!

But God never left her alone – He sent her help... One day, when she was seventeen and was working at IRS as an intern, she met a young woman, only four years older than her, named Sylvia. She was a strong and opinionated individual, but her strength and love for mentoring was addictive! They became good friends instantly and that friendship turned into sisterhood by choice.

Sylvia was there for her no matter what. She was there when her mothers became addicted to alcohol and abandon her children. She was there when Barbara was too tired to fight. She was there where Barbara once again shocked her teachers and passed all big tests that lasted a full month. She not only passed them, but she made A's and B's. Even then Sylvia stood by her and talked about Angels, God's unconditional love, about changes that God makes to make people happy. She taught her how to pray; she taught her which church shared love and passion for Christ. She listened, she observed, she spoke her mind. One day she said, "I think you would be a wonderful teacher; a mentor to young people that need help." Barbara only smiled; she knew that her dreams of becoming a teacher were shuttered by nasty professors and lack of money. Once she became an accountant and economist she was told by her grandmother, with who she lived after her parents got divorced and left her and her five years younger brother, that, "she was unable to attend university, because somebody had to work!" So Barbara found a job. She still played Pro-Basketball, but she did not have a contract and did not make money – professional sport did not pay well in early 90's. She was sad, lonely, but never alone. God always took care of her. He sent her other wonderful people, with whom she grew close throughout many years. Her house doors were always open and her heart was always open. She loved people and people loved her. People kept coming to her for advice, just to talk or to cry on her shoulder. She became a friend like Sylvia was.

Through the next four years of happiness mixed with painful events and tears and lots of difficult to swallow circumstances Barbara was ready for a change. She was devastated; she was crashed. Once again Sylvia helped her to stand up and to turn to God. So Barbara prayed for strength to fall asleep and to wake up in the morning. She was dealing with the pain with a help from Sylvia and few other good friends. She was jobless and her grandmother made her life a living hell; she was weak emotionally, but not mentally.

Six months later her friend, with whom she used to play professionally, came back from Kansas, where she attended a community college and where she played basketball. Barbara went to visit her and was told that her coach was looking for one more post player. Barbara at first was resistant, because for the last five years she did not play. However, something was telling her that it was the only way for her to gain control over her life and run away from a toxic grandmother. She said, "Tell your coach I want to play for her." And so it began!

Two months later Barbara received documents stating that she was awarded a full scholarship at the same college her friend attended. She began the process of collection money for the trip. With no help from her father, who now had another family, and her addicted to alcohol mother, she worked sixteen hours per day to gather the money. It was still not enough for the ticket... One day of her friend introduced her to an American missionary, Eileen Kadlec. They lived in Poland for six years and when they heard my story they offered help. The next week Barbara was called to come to their house. When she got there, and she was forced to walk four miles in one way, she was told that good people gathered $400 for the plane ticket. Barbara was stunned; she did not know what to say... Nobody ever cared about her to help her to that extend! It was a lot of money for her – it was five times more in Poland at that time! When she bought her plane ticket, when she finally got her visa those that did not believe in her and her scholarship were once again shocked! The sorry part was that her closest family members laughed at her and her plans. They did not believe she would make it. But she did... She got on the plane and 24 hours later she landed at Chicago O'Hara Airport. Her life was never the same.

To this day she stays in a close contact with the woman that changed her live. Sylvia now is married and has a beautiful daughter, but she is still a sister by choice to Barbara. To this day they talk about God, about His endless gifts and blessings. Sylvia was one of the first influences that affected Barbara's decision to migrate to America. The plan was to come back, take care of her brother and sick grandmother. But God had different plans! God sent her an Angel; a real man that became her friend and partner and later her husband and a father of her child. God also sent her to work and to do volunteer work and community work, where she discovered that there were plenty of youth that needed to be mentored and showed how to live progressive lives. At age of thirty three Barbara quit her Employment Specialist job and enrolled at Trevecca to become a teacher. She was about to fulfill her long gone dream of becoming a teacher. While she attended Cumberland University she had only two really bad professors and they soon lost their jobs. However, she had a wonderful English teacher that went above and beyond to help her achieve her goals. The same teacher also said that she would not be surprise if Barbara would one day write a book.

Barbara is already working on a book; a book about real friend – God. She is writing the story of her life to show American children that despite the family issues, personal imperfections and financial status nobody should ever give up! God is there and He listens, "Just ask and it will be given to you."

Barbara's favorite quote is not from the Bible, but from a movie... a movie that shows that imperfection to one means everything to another – Forest Gump. A movie that showed Barbara that, "Life is like a box of chocolate, you never know what you can get!"