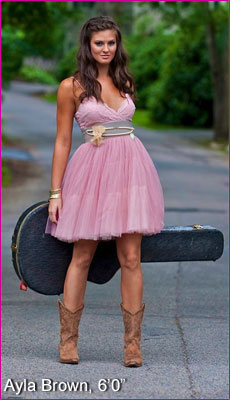 Ayla Marie Brown (born July 28, 1988) is an American recording artist from Wrentham, Massachusetts and formerNCAA basketball player. She was a contestant on American Idol on season 5 in 2006 and placed inside the Top 16. Shortly after the season's conclusion, Brown attended Boston College on a full basketball scholarship, and graduated in 2010 with a communications degree.

Brown has released two full length studio albums, is a spokesperson for the Songs of Love Foundation, and currently serves as the official anthem singer of the Philadelphia 76ers.