6'7" Ashley from Ohio: Another update 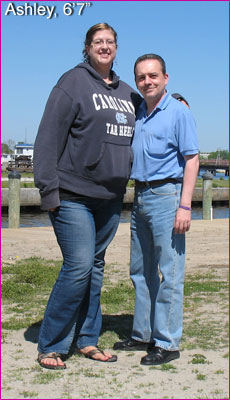 Here's another update before yesterday's update

Ashley writes: Had to take an emergency trip to the doctor this morning. Last night my leg gave out and I slammed the inside (of my bad leg) onto the tile in my foyer. Doctor says I have fractured the inside of my knee and have some possible torn ligaments in my knee as well. I cant even walk to get to the bathroom, and with Zac heading to work I'm not sure how I'm going to make it alone. If anyone would be willing to come by and sit with me for a little while I'd really appreciate it.

Happy Holidays, everyone! This is Zac, Ashley's boyfriend.

I wanted to take a moment and write an update everyone following her story on how she's doing lately. Ashley had wanted to update y'all herself but every time she's down to try and write something she begins to cry and isn't able to finish.

We went to meet a new neurologist at the Cleveland Clinic in late November. She was referred to him by her primary doctor at an income based clinic in Mansfield, Ohio. She specifically requested to be referred to a Neurologist who specialized in Marfan syndrome. When asked if she would prefer to go to Ohio State Medical Center or the Cleveland Clinic, she requested OSU but was instead sent to Cleveland. After the long drive to the Cleveland Clinic we met with the Neurologist and quickly discovered that his only connection to the Marfan Community was his wife being friends with someone from the National Marfan Foundation. He did not specialize or have a working knowledge of MFS. The visit was extremely short. She requested to be tested via MRI for Dural Ectasia (a common disorder that comes with the majority of people suffering from connective tissue disorders). The Neurologist ordered an MRI but upon speaking to Ashley's Orthopedic Surgeon in Mansfield we were informed that he didn't order the correct test to look for Dural Ectasia.

A few days later we made the trip back to Cleveland for an MRI that lasted almost 2 hours. Ashley, who is terrified of needles (and required an MRI with contrast dye) was not treated kindly by the tech performing the test. By the time we returned home, Ashley had received an email from the Neurologist stating, "Your MRI results were fine". We couldn't understand how that could be considering the intense pain and numbness Ashley experiences simply from standing for more than 5 minutes at a time.

A few days after the MRI, Ashley met with her orthopedic surgeon again. She gave him the disc with the MRI on it. About 45 minutes later, Dr Godfrey came into the room, obviously irritated because even though he had requested a copy of the report from the neurologist, none was sent. Dr Godfrey himself reviewed the MRI to the best of his ability and came in to tell us that at the minimum Ashley has a slipped disc in her back. He also believes that a severely pinched nerve could be the cause of the excruciating pain Ashley feels in her left leg continuously. She still doesn't have a diagnosis of Dural
Ectasia, despite the fact that she has every symptom of the disorder.

Dr Godfrey still insists Ashley be on bed rest or in a wheelchair but despite the generous donations on her gofundme site, we haven't been able to get her one. The majority of the money she has received has had to go towards utilities and travel expenses from her frequent doctor visits. One trip to the Cleveland Clinic costs us upwards of $80 (and that's without being able to stop for lunch or dinner – we've never been able to do that due to cost).

Emotionally, Ashley seems to be sinking deeper and deeper into her depression. She will be unable to return to college in the coming semester because, despite being so close to graduating, three of the classes she has left for her major are 'practicums' which would require her to volunteer at a local human services agency (Job & Family Services, for example) for 20-50 hours a week of unpaid work. Ashley has been told she is not to work currently because of the extent of her pain and numerous doctors' visits.. Most days Ashley is unable to get out of bed for more than five to ten minutes at a time.
She is literally lying in bed all day alone. She's had no visitors since this all began a few months ago. I was forced to take our living room television to the pawn store three months ago to get her to an appointment. Now we're unable to pay the $300 to get it out so that she can at least sit in the living room some days.

She will be starting at a Pain Management facility in early January and is unsure what to expect. Her orthopedic surgeon had placed her on a mild muscle relaxer (to calm the extreme muscle twitches associated with her pain that keep her awake most night) and a strong pain reliever.

She informed Dr Godfrey that she had finally gotten into a routine with her medications that took the edge off the pain and allowed her to rest at night. Unfortunately, Dr Godfrey decided to take her from 8 tablets of pain medicine a day down to 2 in only 2 short weeks. Her pain is back and worse than ever.

Christmas was a very sad and emotional day for us both. We were unable to do anything for each other on Christmas due to our financial emergency. This devastated Ashley no matter how many times I told her that I didn't want her to worry about that.

I work six days a week as a tow truck driver for a local company. Despite working 6 hours a day with two 24 hour 'on call shifts', I'm only making $8.00/hr and bringing home approximately $200 a week. We're not able to get out of the financial hole we're in and I know that stresses my love out even more. She feels as though this situation is all her fault. As a result, I feel like I'm not doing my job supporting Ashley.

We still have not been able to get Ashley into a wheelchair because the type she needs runs around $700 used. She has recently been accepted for Medicaid but they, so far, have refused to fill he prescription provided by Dr Godfrey for the wheelchair.

Many have given us wonderful ideas as to how to get help from the government in an attempt to get our heads back above water. Ashley has spent hours on the phone and internet trying to get someone, anyone to help her. Without children, however, she doesn't qualify for utility assistance, cash assistance, transportation assistance, or food stamps (unless she works 20 hour a week – which she cannot do). We're learning now that Ashley more than likely won't be able to file for disability because the small widows pension she receives each month from her first husband's passing puts her over the 300% poverty level (her pension is approximately $1100/month).

I'm working as hard and long as I can but I'm not able to provide for her. Ashley is the love of my life. It breaks my heart to hear her cry, whimper when she tries to stand up or lay down. I want so badly to find a better paying job, but with us only having one vehicle that's almost impossible. Our electricity is dangerously close to be shut off and we haven't been able to grocery shop in months. Ashley is currently eating one meal a day to try and make what little we have left. I would love nothing more than to be able to bring groceries home, tell her the bills are caught up, and surprise her with a small bouquet of flowers to brighten her day. Won't you please help me make this happen?

We would like to, again, thank everyone who has shared her story, donated to her, prayed for her, and even researched Marfan syndrome to learn how it can affect a person. No two cases of MFS are the same, some are hit worse than others.

Ashley & I are both very prideful people who hate asking for help, even when it's desperately needed. I'm writing today to plead to the kindhearted people following her story to help us in any way you're able. Ashley is the absolute love of my life and I cannot stand to see her feeling so lonely and upset.

Please keep Ashley in your thoughts & prayers. She is a good woman who has been through absolute hell in her life. She's been knocked down hard. Between the left leg pain, her hip pain (one of the tumors has flared back again), her lower back pain, and the frequent headaches she suffers from I don't know how much longer she has before she breaks completely.

Every person who shares her story on their Facebook page and/or website is advocating for Ashley in a great way. Neither one of us could ever thank y'all enough. Ashley has mentioned to me several times that she's praying one day she can pay forward some of the generosity from people who
follow her story.

Thank you for reading, God bless you, & have a joyful New Year.