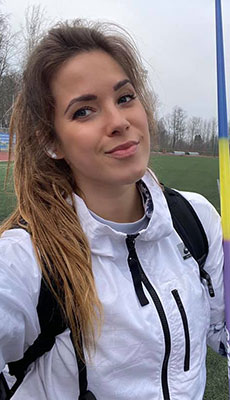 Maria Magdalena Andrejczyk is only 5'9", but she really stands out. Here's an article from NPR:

An Olympian Sold Her Silver Medal To Fund A Boy's Surgery. The Buyer Let Her Keep It

Just days after the Tokyo Olympics, a Polish javelin thrower auctioned off her silver medal to help pay for an infant's heart surgery.

Maria Magdalena Andrejczyk announced on Facebook last week that she would sell her medal and put the proceeds toward an operation for 8-month-old Miłoszek Małysa. According to a fundraiser page, the boy is under home hospice care and requires an urgent operation in the United States.

The Polish convenience store chain Żabka placed the top bid, paying $125,000 for the silver medal, according to media reports.

But instead of collecting its prize, Żabka announced it would let Andrejczyk keep the silver medal after all.

"We were moved by the beautiful and extremely noble gesture of our Olympian," the company said in a Facebook post translated from Polish. "We also decided that the silver medal from Tokyo will remain with Ms. Maria, who showed how great she is."

After the auction closed, Andrejczyk said in a translated Facebook post that the medal was to her a "symbol of struggle, faith and the pursuit of dreams despite many adversities."

She added: "I hope that for you it will be a symbol of the life we ​​fought for together."

P.S.: NPR forgot to mention that Ms. Andrejczyk is "familiar with adversity". She missed placing in the 2016 Rio Games by a few centimeters. In 2018, she was diagnosed with bone cancer.