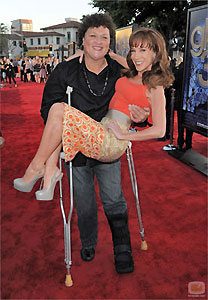 Dorothy-Marie "Dot" Jones was born on January 4, 1964 in Turlock, California and is a retired athlete and 2 time Emmy Nominated actress who has had multiple roles in television and film.

Dot was raised in Hilmar, CA and first got involved in strength competitions at a fairly young age. She started track in middle school then while she attended Hilmar High School, she was a champion weight lifter and named female athlete of the year. She started arm wrestling on a whim, and won her first arm wrestling world championship at 19 years old and went on to win 14 more.

In 1988 and 1992 Dot qualified for the U.S. Olympic Trials for shot put. During her sporting career, she suffered 11 knee injuries, bringing her height of 6 ft 4 in (1.93 m) down to 6 ft 3 in (1.91 m) however, a knee replacement surgery gave her lost inch back. After college, Dot worked as a youth counsellor at the Fresno County Juvenile Probation center while continuing her involvement with sports.

Dot had no intentions of acting, however, while at a bodybuilding competition, Shirley Eson of American Gladiators fame urged Jones to audition for a Medieval themed show simliar to American Gladiators, Knights and Warriors. Dot got the part, becoming regular and one of the few female warriors. She was also offered a position in professional wrestling, but turned it down to focus on acting.

Knights and Warriors only lasted one season, but for Dot, her acting career was just starting. She became a bit actor, playing small roles in several television series throughout the 1990s and 2000s and breaking into feature films in the late 1990s. While acting, she kept up her involvement with arm wrestling. In 1995, her biceps measured 171/2 in (44.45 cm).

Her first recurring role after Knights was as a character named "Dot" on the popular show Married... with Children in the mid-90s. She appeared in five episodes over two seasons. In 1999 she gained many fans with her portrayal of Rosengurtle Baumgartener in the cult hit movie, The Boondock Saints. Jones' next break was on the kids show Lizzie McGuire as Coach Kelly. Since then, she has appeared in popular shows Nip/Tuck, Desperate Housewives, and Prison Break, among others.

Dot was a big fan of Glee and having worked with series co-creator Ryan Murphy on Nip/Tuck and Pretty/Handsome, asked co-executive producer Brad Falchuk during an encounter at a supermarket if she could be on the show. Soon after, the character of Coach Shannon Beiste was created for her.

Dot is currently living in LA with her beautiful partner Bridgett and her cats Squirrel and Doolin.