Julie emailed me in 2012: "Dear Joerg, Love your website, congratulations. In appreciation, a picture and quote from my new book:

“Tall girls, don’t slump.
Think of how many short guys out there
Would love to have your offspring.
Stand up for them.” 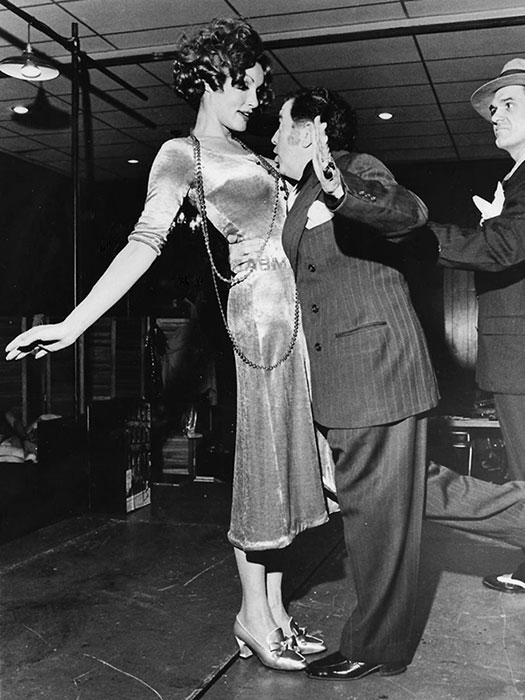 As an eleventh generation American and a Mayflower descendant, Julie Newmar has beauty, brains and a charming sense of humor. Born Julia Chalene Newmeyer in Los Angeles, her father, Donald, was an engineering professor, head of the Phys Ed. Department, and head football coach at LACC. He was on the L. A. Buccaneers Wonder Team. Her mother, Helen Jesmer, was a Ziegfeld Follies girl, said by Eddie Cantor to have the most beautiful legs in the Follies. From an early age, Julie studied classical piano, ballet, and every form of dance her mother would drive her to lessons for, graduating high school at 15, then spending a year in Europe with her mother and brother John. On her UCLA entrance exam, she scored a 99, staying only six weeks, switching to Universal Studios as choreographer, teacher, and dance double. Not yet 18, she was the original "Golden Girl," a statue-come-to-life dancing in "Serpent of the Nile," often times seen on MySpace, YouTube, and was one of the brides in the classic MGM musical "Seven Brides for Seven Brothers."

"Silk Stockings" was her first role on Broadway at 19. Then the very "Stupefyin’ Jones" in "Li’l Abner." She won a Tony for her first speaking role in the hit comedy "Marriage-Go-Round" (Claudette Colbert and Charles Boyer). A contract with 20th Century Fox provided Marilyn Monroe/Jayne Mansfield-type roles in "The Rookie," "The Maltese Bippy,"… In London, she played the ubiquitous love interest of Zero Mostel in the unfinished film "Monsieur Le Coq." She also toured in the National Company, opposite Joel Gray, in "Stop the World, I Want to Get Off." Her legs were insured for $10 million (except in the event of theft).

Making the transition to TV, Julie had many memorable song and dance routines (a Jonathan Winters Special, The Danny Kaye Show, Mike Douglas Show) but is best known for her comedic as well as supernatural roles. She was the complex and alluring motorcycle babe in two episodes of "Route 66" (a role created for her by Stirling Silliphant) and starred in a "Twilight Zone" episode as The Devil. She was claimed again by Jim Aubrey, President of CBS for the lead in "My Living Doll" as Rhoda the robot, still a cult sitcom favorite. 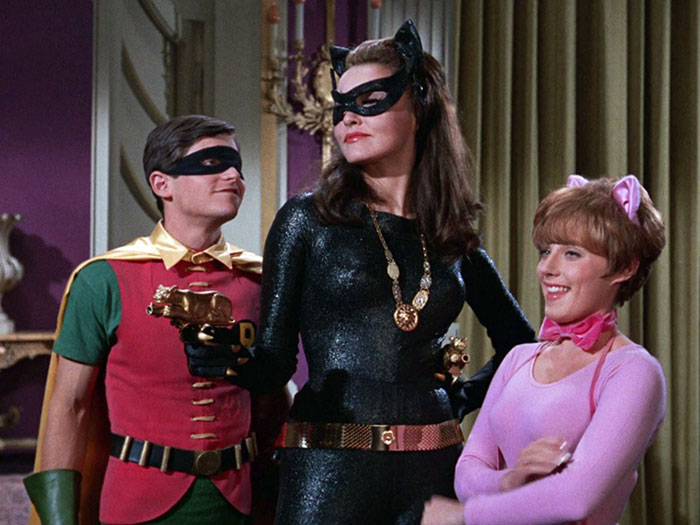 In 1966, urged by her brother at Harvard, she created the role of Catwoman in "Batman." Her sense of humor and physicality made her this show’s most popular villain. Similarly popular was her appearance as April the Laundress in "The Monkees Get Out More Dirt". On "Wide, Wide World of Sports," she made three parachute jumps. She was killed off in "Columbo" but slayed audiences as Lola in "Damn Yankees." She was given a chapter in the book "Mothers of Invention" for having created "Nudemar," a new design in pantyhose, appearing in People Magazine.

In the 1980s, Julie appeared in nine films of "presumptive" value while raising her son. A mother at 49 and divorced, she attended UCLA and took courses so she could more effectively run her own real estate business. In 1991, Julie took on the Rosalind Russel role in "The Women," then astonished Broadway in a revival of "Li’l Abner," 42 years after performing in the original production as Stupefyin’ Jones in the same costume. In her 60s, she became a modeling sensation in Paris for Thierry Mugler and appeared among the fashion world’s most gorgeous divas in George Michael’s music video "Too Funky."

Few women have had a movie named after them. Julie’s name literally became box office via "To Wong Foo, Thanks for Everything, Julie Newmar," a film from Stephen Spielberg’s company. Literary types from John D. MacDonald to Harlan Coben have written characters based on Julie or alluding to Julie’s "special… beautiful and animated… incomparable feminine" personality. She was persuaded by Adam West to re-make Catwoman in his "Return to the Batcave." She also appeared in her own "A&E Biography."

A feud over "quality of life" issues with neighbor Jim Belushi ended amicably in a historic and hysteric guest spot on his show, "According to Jim," which once again proved she’s as active and attractive as ever. Batman’s formidable feline, Belushi’s archly attractive enemy.

From the ‘60s into the 21st century, Julie is still fascinating. "Beauty is her business" as well as her passion for art and design and gardening, which have led to a rose, day lily, and an orchid named in her honor. Her magnificent gardens are first choice for L.A.’s top charity events. "Why not? I live in Paradise."

A book on the oft asked questions "How do you look the way you do?" The answers are few when it comes to makeup and exercise. "It’s the inner life that’s all important". Check it out on JulieNewmar.com – her 2011 book, "The Conscious Catwoman Explains Life on Earth". She is currently writing short stories, magazine pieces, as well as a bi-monthly memoir on the beatitudes of yes, consummate bliss.