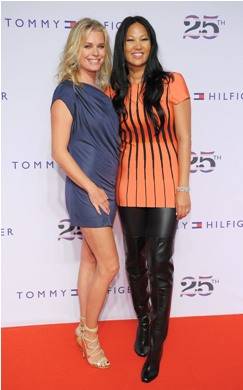 Kimora Lee Simmons (née Perkins; born May 4, 1975) is a former American fashion model. She created Baby Phat and was CEO/Creative Director through 2010.

In 2011, she was hired as president/Creative Director for JustFab.

Simmons was born in St. Louis, Missouri. Her Korean mother, Joanne Perkins, was adopted by an American serviceman during the Korean War and raised in the USA. She later worked as an administrator for Social Security. Kimora's father, Vernon Whitlock Jr., is African American, and worked as a Federal Marshal, an Equal Employment Opportunity Commission investigator, a bail bondsman, and later became a barber in St. Louis. He was sentenced to 24 years in prison when Kimora was in grade school for distribution of narcotics. Whitlock was released after three, after turning state's evidence against his supplier. Her parents split up and she was raised by her mother.

Growing up in the northern St. Louis suburb of Florissant, Missouri, Kimora was the target of schoolyard bullying and teasing, because of her height (she was 5 feet 10 inches (1.78 m) tall by the time she was 10 years old) and mixed ancestry.

To help her, Simmons's mother enrolled her in a modeling class when she was eleven years old. Two years later she was discovered by Marie-Christine Kollock (a representative for seminal Paris Agency Glamour) at a Model Search in Kansas City (organized by Kay Mitchell) and sent to Paris. Simmons is a graduate of Lutheran North High School in St. Louis, Missouri.