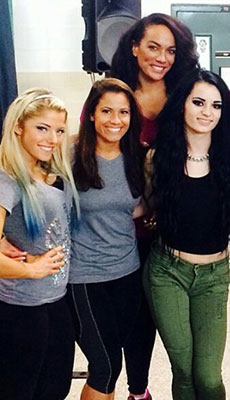 There’s one thing that’s painfully clear when someone steps in the ring with Nia Jax — she’s not like most Divas.

The cousin of The Rock, the 6-foot-tall Jax has towered over other women for as long as she can recall. She was kicked out of activities like karate, kickboxing and judo as a child because someone always ended up getting hurt at her hands.

Jax eventually turned her attention toward the world of modeling, but still hungered for competition. She made her way to the WWE Performance Center, where she learned to harness her aggression in the squared circle. She blows all the other Divas away in terms of power, holding all of the Performance Center’s lifting records.

That gives Jax a unique advantage in the ring. She can overpower any Diva with ease, which she showed in her debut match in NXT. Jax dominated her competition, squeezing the air out of her opponent with a crushing bear hug before viciously slamming her into the mat to earn the victory. She will look to come back stronger after losing a close contest to Bayley at NXT TakeOver: London.

In the weeks leading up to her NXT debut, Nia Jax stated that greatness is her destiny. Her powerful skill set may ensure that she reaches it sooner than anyone expects.