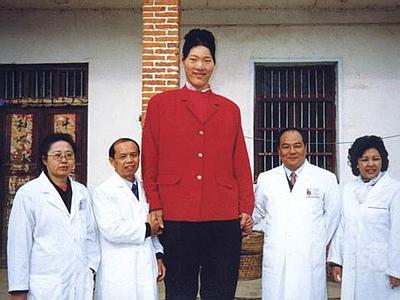 It has been confirmed that De-Fen Yao has died.  According to a programme on the Discovery Channel UK she was supposed to have an operation on the brain tumour which caused her gigantism in January 2007. So far I haven't had any news if the operation had taken place or not. 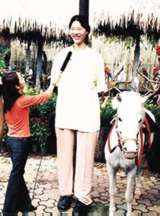 I've been asked several times why I consider Ms. Yao to be the tallest woman in the world:

Well, as you can see in the video-clip it has finally been confirmed that she is the tallest woman in the world. I guess the Guinness Book of Records needs to be updated.

The story: 19 years ago she was diagnosed with Acromegaly – a disease resulting from a tumour on the pituitary gland causing it to pump out excess growth hormone. Thanks to a documentary being made for a British Television programme, two of the leading doctors specialising in Acromegaly have offered to help De-Fen for free. The doctors and the television production team have been raising money for De-Fen’s recovery and future.

Even though the actual appear is now over you can still visit the Yao Defen Appeal Website.