Tallwomen.org has been around since 1997 (under a different web address until 2000) and has since become a trusted resource for tall women and / or ladies who require footwear in large sizes or extra long clothing.

I only accept topical banners and don't accept links to websites that are not focused on tall women and their needs.

If you have regular specials or updates (i.e. new styles) I will post articles in the News or Sale sections which will then appear in the Latest Articles column (and will therefore be seen on every page on tallwomen.org).

Before the re-design of Tallwomen.org I had a somewhat rigid pricing structure for banners. Since the new website is so much more modular this is no longer the case.

Of course, the number of potential page views will play a part in the estimation of your specific rate. I.e. a banner on the Clothing USA or Footwear USA pages is more expensive than a banner on, say, the Clothing Australia or Footwear Germany pages. Since the default language of tallwomen.org is English, English language websites will generate more page views. Furthermore the population of the country you are based in is also a factor. 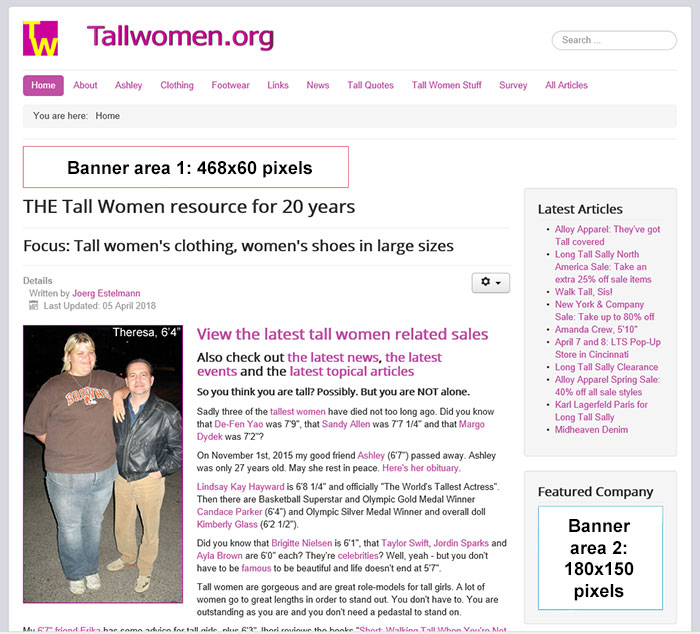 The banner will appear on the homepage of each section and all sub-pages (the pages of your competitors). You can also rent the two banners in question on ALL pages. Banner area 1 would cost $6000 per year, Banner area 2 is cheaper at $3500 per year.

If you would like to know more or discuss details or have a rate suggestion for a specific page email me at This email address is being protected from spambots. You need JavaScript enabled to view it..