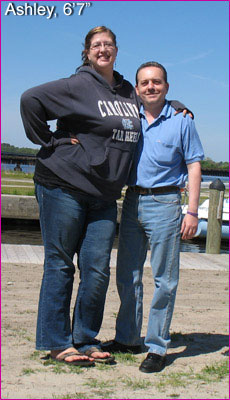 With sadness I have to report that my good friend Ashley passed away last night. She went to bed with her boyfriend and fell asleep. Sadly she never woke up again.

She may have been only 19 at the time, but due to her history (Ashley suffered from Marfan Sydrome) and health issue she was already a real grown-up and wise beyond her years. That's she because Tall Woman of the Month for September of 2007.

I finally met Ashley in person in New Bern, NC in April of 2011. She suffered from a pretty bad pneumonia back then (probably another result of Marfan) and I thought she would die on me when she started coughing - and couldn't stop. I went back to the supermarket we just left and got her a bottle of water. When I came back the driver of a vehicle parked next to us was asking if she needed any help. Ashley never had it easy.

When I learned earlier that Ashley had died last night, I couldn't believe it. Even though I knew that something might happen at any time I still didn't consider the likelyhood that she might pass away before me. It's totally unfair.

But that's the problem with Marfan Syndrome. Sufferers don't usually get to grow old. On the contrary. They tend to die much too young.

For the time being I have run out of words. I may extend this in the coming days. I would just ask you to pray for Ashley and her loved ones. Especially her boyfriend Zach.

In the future I will focus on the health issues connected to Marfan Syndrome more. Rest in peace, my dear friend. You will be missed!

In 1992 I was 4 years old. It was during '92 that my father died from an aortic dissection. He was diagnosed, posthumously with Marfan Syndrome, a connective tissue disorder that can wreak havoc on every part of the affected person's body. He was a man who stood 7ft tall, played basketball for Iowa State University, and lived his entire life with a diagnosis he never received. Medical knowledge of Marfan Syndrome was just starting to form in the 90's.

Three years later, at the age of 7, I was diagnosed with the same disorder. At the age of 11, when I stood 6ft tall, I was told I had to stop all strenuous physical activity immediately, or risk a sudden, unexpected death (due to aortic dissection). I stopped playing sports and started receiving annual echocardiagrams, and began seeing specialists at The Ohio State University's medical center.

By the age of 18 my height finally began to slow, and I stood at a towering 6'7" tall. Let's just say THAT alone has been an adventure (LOL!). Don't be surprised if you see me walking around in an Ohio winter with capris on. At one time they were designed to be long pants but with 42" legs there's only so much a girl can do!

I married my first love, Robert, at the age of 18. He was in the Marine Corps and had just returned from his second deployment. We lived together in California until he was restationed in North Carolina. As soon as we got to North Carolina I found a new team of specialists at Duke Medical Center. They were fantastic. While many would complain about the military healthcare we received, I couldn't say a negative word. I was able to get the care & medications I needed to thrive!

Things were going well. I had several medical issues that were attributed to Marfan Syndrome (scoliosis, sciatica, became legally blind without glasses, etc) but they were nothing I couldn't manage with the help of the great team at Duke.

However, my life was about to be rocked. In July of 2011 my best friend, a beautiful 19 year old gospel singer named Caitlyn Culpepper was murdered outside our home while I was asleep inside. She was a victim of domestic violence. My husband, at this point a Sgt in the Marine Corps with 8 years in the service and 26 months spent deployed, had been diagnosed with PTSD while serving his final tour in Iraq.

In September of 2011 Robert committed suicide in our home in North Carolina. I became a widow in my early 20's.

I came home to Ohio to try and rebuild a life for myself. By this point my physical health problems had started to affect my daily life. It was almost as if the grief and anxiety wrecked my body. I can honestly say I haven't been the same since.

In the last three years my health has declined dramatically. When I lost my husband I no longer had my health insurance through the military. I could no longer afford doctor's visits, medications, and preventative care for basic health, let alone to manage my Marfan Syndrome.

One of the most painful and frustrating aspects of my condition is the effect it has on my bones. They're weak. Did you know that connective tissue has a huge impact in the formation of your bones?

In the last two and a half years I've had three stress fractures (two in my left leg, one in my right) and two tumors (which were determined to be benign but I was advised to have them monitored every 3-6 months to make sure they haven't grown or become aggressive).

I'm a 26 year old young woman who loves to laugh, joke, and have fun. But I have no quality of life left. I'm no longer able to walk through the grocery store because of lower back issues (a condition called Dural Ectasia) that cause intense pain, numbness, and tingling when I stand or walk for more than five to ten minutes. My health has deteriorated to the point where it's physically exhausting to get out of bed most mornings. My mental health is honestly about the same.

Due to my physical health problems I'm unable to work. I had originally begun Cosmetology School to become a nail artist. I thought if I could just make it through my year of schooling I'd be able to have a career that allowed me to sit. I made it 7 months before the pain was too overwhelming to continue. I'm currently a full time student, majoring in Human Services. I want to help people who are in situations like myself. I want to be the person that answers the phone at your local agency (Job & Family Services, for example) who says, "It's going to be okay. And I'm going to do everything I can to help you". But I've come to realize, at the age of 26, that I may never have the chance to work. I may have to file for disability before the age of 30.

In the meantime, bills are mounting. Medical bills, utility bills, etc. I have to visit local food pantries often in order to eat. I DO recieve a small benefit each month from the VA, but it wasn't designed to be able to live on. I was, however, attempting to keep my head above water.

Anyone who has lived through physical pain, mental anguish, and seemingly unclimbable mountains, knows that 'when it rains it pours'. And it's pouring for me.

The last two weeks I've been experiencing excruciating pain through my left leg. I went to the same orthopedic surgeon who diagnosed my first stress fractures and found out that they believe I have not only another tumor, but another stress fracture as well. And this one lines up with the first one I had on the other side of the leg. They meet in the middle and form a line straight through my leg.

I was devestated. Incase you don't know, a stress fracture is basically a broken bone that hasn't become completely detached from itself. And this is my fourth. I don't work out, I don't run, I don't play sports..I just have Marfan Syndrome.

I started to cry and asked the doctor what he wanted me to do. He immediately told me to get OFF of my legs. He said crutches weren't an option. That I could put all my weight on my RIGHT leg because that pressure can cause another fracture to develop there as well. He looked at me and said, "Ashley if you don't get into a wheelchair you could take a step and your leg could literally snap in half".