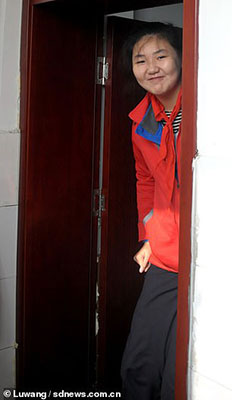 A Chinese schoolgirl who is nearly 7ft tall aged 11 has been compared to one of her country’s greatest ever sportsmen.

Zhang Ziyu towers over her classmates at 6ft 10ins tall and is already a prodigious basketball player.

Now Zhang, who idolises NBA star LeBron James, has been dubbed ‘the female Yao Ming’. Yao, now retired aged 38, was a Houston Rockets centre for eight years as well as a constant for the Chinese men’s national basketball team.

He is considered one of the country’s greatest sportsmen and was inducted into Naismith Basketball Hall of Fame in 2016.

Now in her sixth year at Wenhua East Road Primary School in Jinan, capital of East China's Shandong Province, Zhang is reportedly likely to become a basketball player in the future too.

Both her parents are former professional basketball players, who began teaching their daughter about the game at the age of five.

Zhang's classmates at school are fond of their very tall friend.

'I like Zhang Ziyu because she's very tall!' one said.

Another added: 'She can lift some of our shorter classmates using one arm!'

A schoolboy who has known Zhang since the start of primary school said: 'She was 1.6 metres (3ft 3in) in our first years. We've been growing for six years but still aren't as tall as she was in grade one.'

Another added: 'She's younger than I am by a few months, but she has to bend down to talk to me.'