6'7" Erika from Indiana gives some advice

Hello! My name is Erika, I am 6'7" tall and live in the USA. I want to tell you a story about some of my struggles I had growing up:

I really started growing in the 3rd grade, at that time I was 5'8"; and being a third grader everyone didn't know what to think of me. All the kids made fun of me, and they were so mean. 3 years later and I grew to 6'1", I was just starting middle school, (or junior high) whatever you call it. Some of the boys thought it was cool, and the girls were jealous. I didn't realize at the time, I was a big threat to them. I was trying to make friends with anything I had in common, I played sports and was in the orchestra. Those kids saw me, not my height, and eventually others started seeing the inner me too. I guess you could say it was my grandmother, who preached for me to sit up straight, always telling me there was a string in the middle of my chest pulling me upward towards the ceiling. I didn't understand at the time, but later realized she wanted me to have good posture. She was 6'1" and passed away a couple of years ago aged 98. Almost a century old she had many stories to tell me when I was growing up. I would say those helped my confidence level improve. I wasn't concerned with the "popular or in-crowd" kids fall into; I was popular because I was a jock who could keep a beat, =) . 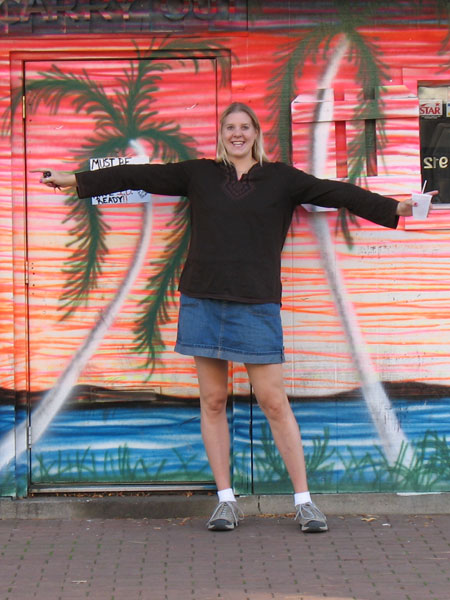 I was in the sixth grade, and school had just started and if learning your way around a new school wasn't enough drama I had extra drama due to my height. Try to visualize this...

I am in the restroom and the stalls are not full size: they are a little shorter because most kids are shorter, anyways, I was able to see over the door of the stall, my whole head was visible, and in walked a teacher. She saw me and instantly assumed I was standing on the toilet. With a yelling voice she pointed at me and said "you there get off that toilet, I see you" to my surprise, I asked "are you talking to me?" and questioning why she was telling me that. She said, "Yes, You, I see you above the stall!", I said, "Excuse me?!? Do you see those feet down there? Those are mine, and since those are mine, how could I be standing on the toilet?!?" I walked out of the stall and showed her I was standing on floor; not on the toilet at all, I was in fact just that tall. Her mouth hit the floor, well not literally, but almost, she was very apologetic all of a sudden, apologizing and said something like, "I am so sorry, I didn't know, I just assumed you were fooling around, please take these hall passes in return" I had enough hall passes for an entire year. I guess she was afraid I would tell my guidance counselor or some one higher up and she would be fired. She was very nice to me from that moment on. It was a real confidence booster. And we became friends until she retired a year later. I'll never forget that story and tell it quite often. It is a good example of how people perceive someone without really "knowing them". I am sure you have heard the saying, "Never judge a book by it's cover?"

As I was getting better in sports and others looked at me to help them WIN a game, it carried over when we were off the court too. Then their friends would become my friends too. You could say I didn't have that many "girl" friends growning up, they were threatened by me, because their boyfriends were all friends of mine, because I would play with them more than the girls and That is because I had a daredevil for a father, and that is another story.

So here is where I am ready to tell you, stand up tall, be proud of your height, beautiful = tall. People may not see it now, but they will admire you before long. It's what's in your heart that matters and if anyone says anything different, then they are NOT your friend and NOT worthy of your friendship. Your friends, (true friends) will see you - the real you, not your physical appearance.

There are some struggles you might encounter, but believe me the pros are much greater than the cons, and you will feel better about yourself and others will see it too. I cannot give you a date or time this will all happen, but for me, the change happened very quickly. I have found out that when I am in a crowded room people seem to move out of my way, (which is cool) and if they don't I bump into them and say, "oh, I am sorry, I didn't see you down there" You will notice some people are rude and we can get into that later. For now, I want you to think about what I have said here, and let me know what you think, talk to me, cause I have heard it all; and trust me I have been there. 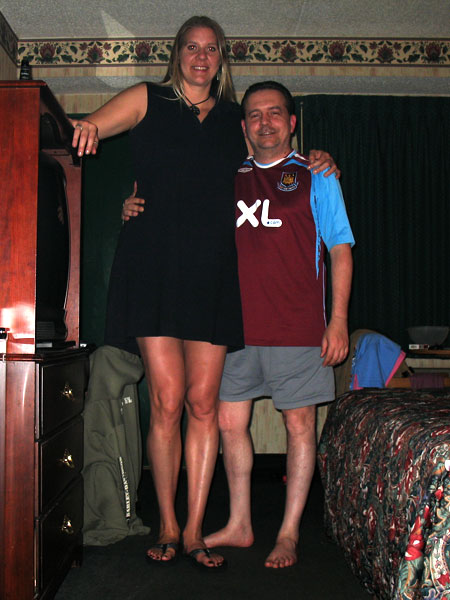 The picture above shows Joerg and myself, and on a final note I want to say. I love my height and I wouldn't give up it up for anything in the world, anything. The past couple of years have been great I have been wearing heels, I figure what's a couple more inches right? Hehee.

I wish you all the best!
Erika

P.S.: No, I didn't have a chance to meet Sandy Allen who was a whole foot taller than me, I did however meet her best friend, who's 5'2" funny huh? Anyway, Rita is her name, she told me Sandy liked to joke about her height which seemed to break the ice, the awkward moments you have when people first see you, she did it with humor, Rita made her some shirts to wear that were funny, they said, "I like short people, I had 3 for lunch." 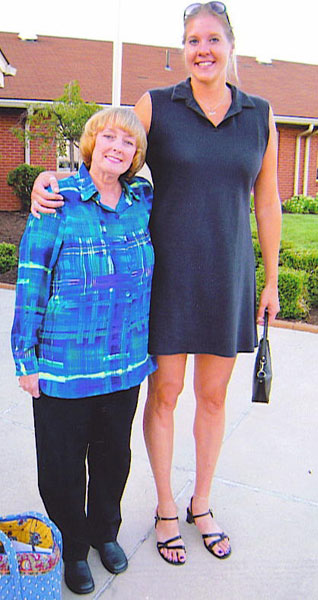 P.P.S.: The second picture is Rita and myself at Sandy Allen's viewing.

0 # William 2016-03-19 00:08
What a great story and I have always said life would be boring if we were all the same. I'm 6'1 so would love to meet Erica like John Melloncamp said "show me someone I can look up to.give me someone I can love"lol she seems worthy of looking up to and thats even if she were