Friends no longer with us 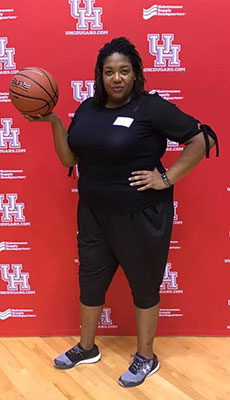 I just found out that my friend Margo Graham passed away on September 22, 2020. (Thanks for focussing on the important things, Facebook!)

Margo Graham, the first University of Houston player to reach the WNBA, passed away on Sept. 22. She was 49.

A cause of death was not immediately known. Graham, a star center/forward for the Cougars from 1991-93, had suffered a stroke in late August.

A two-year starter, Graham was a member of UH’s 1992 squad that advanced to the NCAA Tournament. Graham had her best season in 1992-93, leading the team in scoring (13.5), rebounding (8.9) and blocks (1.4) and earning second-team All-Southwest Conference. She still ranks among UH’s career leaders in rebounds (7.8).

Graham went undrafted and played 10 games for the Washington Mystics of the WNBA in 1998, becoming the first from UH to play in the women’s league that began a year earlier.

Graham, a former standout at St. Agnes and UH, played professionally in the ABL with the Atlanta Glory and overseas, experience that eventually paved the way for her coaching career.

"I was able to play in 10 different countries," Graham told the Houston Chronicle in a 2011 interview. "It was the opportunity of a lifetime, getting to absorb different cultures. I learned a lot."

Graham’s first head coaching job was at The Village School in Houston, and she also had stints at Houston Baptist, St. Thomas and Magnolia West, according to her LinkedIn page. Most recently, Graham was assistant volleyball coach at Pasadena High School.

"It is with great sadness that we announce the passing of a former assistant coach Margo Graham," the school posted on social media. "She was an amazing human being that could light up a room with her smile and set kids straight with firmness! We are sending our prayers to her family during this time. Once an eagle always an eagle."

Margo was born on December 18, 1970. I will always honour her memory. Rest in peace, Margo. You will be missed.

Here is her obituary