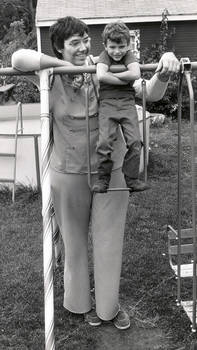 Family, friends and even strangers are gathered here today, not to mourn the death of Sandy Allen, but to celebrate her extraordinary life.

While Sandy was known to most people by her size, those who were touched by her life, even briefly, know that her character and her compassion were much bigger than any measurement found in the Guinness Book of Records.

Because she was often self-effacing, Sandy never thought she had the ability to affect people's lives or leave a positive impact on the world. Well, she was wrong. People from all over the world are expressing their admiration for the shy young woman from Shelbyville who was thrust overnight into an international spotlight, and who learned how to make her inner light shine in public.

Sandy once said, "Getting in the Guinness Book of Records really changed my life. It has given me the opportunity to travel all over the world, see places I would only have dreamed of. ...and it sort of brought me out of my shell."

As one person commented on the Internet, "I'm sure Sandy is now the world's tallest angel in heaven." Another said, "The world is a better place because that woman lived, as her influence and work brought so much light. Wouldn't it be nice if we could all say that about our lives at the end?

Indiana Governor Mitch Daniels said that he "admired very much the way she handled a uniquely difficult situation with uncomplaining grace."

If only Sandy could hear all of these accolades - but then, she'd just wonder who all these people were talking about.

It was that humble attitude that endeared her to so many. That, and the way she reached out to people, especially children, to show them how important it was to accept everyone's differences. She knew how to make everyone feel special.

Most people will remember Sandy for her great sense of humor and the way she could poke fun at her height before anyone else had a chance to. Sometimes she did it by wearing funny T-shirts that said "I like short people, I had three for lunch" or "Life's short, I'm not." Perhaps her sense of humor was a way of coping with difficult situations, but I believe her witty one-liners came naturally. One time, when I first met Sandy, we were going to Los Angeles so she could be on the Merv Griffin Show. We were making a last-minute stop in the restroom at the airport, and for those of you who are old enough to remember, there were pay toilets. I was digging around in my purse for a dime and Sandy asked me what I was doing. I said I was getting the money for the pay toilet. Without a word, she walked over to the stall, reached over the top and unlatched it from the inside. "Save your money," she said. Another time Sandy got some laughs was when the Randy Newman song, "Short People", was popular and a local DJ was having a short people's party at a local bar. You had to be 5-foot-4 or less to get in. Sandy decided we need to crash this party, and everyone went wild when she ducked through the doorway. Needless to say, she was a BIG hit.

When Shelbyville residents Julie and Dennis Wilhoit got married and Sandy attended the wedding, she was admiring the beadwork on Julie's gown. She said that she would never have the experience of wearing a wedding dress or walking down the aisle. Julie told her not to worry, that someday her prince would come. Sandy said, "Well, if he does, he'd better be 8 feet tall and riding a damn elephant!"

But beyond being the world's tallest woman, what defined Sandy Allen?

She loved puzzle books, Stephen King, Dean Koontz and Harry Potter. She loved to sing "Elvira" at karaoke and beating everyone at backgammon. She loved jewelry, especially dangly earrings, and nice clothes. She loved going to Pacers games and waving at the players. She loved chocolate éclairs and brownies from Linne's Bakery. Her favorite drinks were Pepsi and Long Island iced tea. She loved to ride her motorized wheelchair down Miller Street to Kendall's Bar, at least when nobody tried to stop her. She loved wrestling matches and even beat one wrestler she didn't like over the head with a shoe. She loved talking to children and making them feel good about themselves. She loved Kenny Rogers. She loved God.

Shelbyville's most famous citizen had a kind heart and a good outlook on life despite the difficulties she encountered. She also could be stubborn, short-tempered and down on herself for making mistakes. She didn't like to watch herself on TV, but she enjoyed filming documentaries and other shows as long as she could go shopping afterwards. She was a giver and loved to find just the right present for someone.

Her brother Mike will remember Sandy as his protector. "She cared for me, and I know how lucky I am to have had her in my life." He said that, "Through the hard times and the good times one thing never did change and that was our love for each other."

When her sister Darlene was going through health problems, she leaned on Sandy, who was a great comfort to her. Even though she lived far away, she always knew Sandy's thoughts were with her through the tough times. She said she was lucky to have Sandy as her sister.

Linda Fox, Sandy's tough-love caretaker, said that Sandy kept her retirement from being dull, and that she brightened her life and kept her active.

Sandy's friend John Kleiman said that "Sandy taught me to be patient, to persevere, and gave me hope that there would always be better days."

Sandy also had a great love for animals and always had cats and dogs in her house. Now, she'll be able to once more enjoy Shelby, Barney, Teddy Bear, Becky Jane, Jitsu and all of the other critters who came into her life. Most of all, Sandy is once again with her beloved grandmother, Emma Warfield, whose unconditional love helped Sandy get through the hard times growing up. Emma, instilled in her the values of hard work and being proud of who she was, among other lessons that Sandy never forgot. Sandy Allen was a gentle giant who was beloved around the world. She had a caring spirit, and that spirit will remain in all of us as long as we keep Sandy in our hearts.

+1 # Jackie Allum 2020-05-09 02:57
I used to know Sandy when I was a teen in Niagara falls she lived in the apt building on my street. I would go over and help clean up and sit and talk with her. She was one fascinating lady and so nice. I will always remember you sandy and the talks we had. Fly pain free and making people laugh Sandy. Much love.
Reply | Reply with quote | Quote
0 # Joerg Estelmann 2020-05-09 03:34
That's a great story. Thank you for sharing it.
Reply | Reply with quote | Quote
Refresh comments list
Add comment
JComments