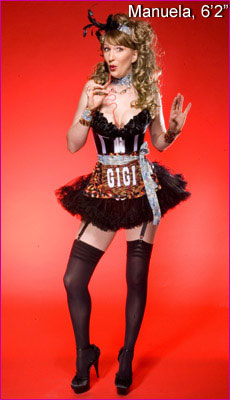 Manuela Horn, also known as the Austrian Amazon, is a yodeling, dancing, acting comedic force of nature. In 1999 Manuela Horn graduated from acting school. After small roles in independent movies & her own children's TV show she turned her 6 foot 2 inch height into an asset as a comedic host for corporate events, and galas.In 2000 Pomp Duck & Circumstance, the mother ship of the dinner cirque movement, hired her as a leg model. Six months later Manuela had evolved her role into one of the most beloved, longest running and irreverent characters in Pomp history. Teatro Zinzanni imported Manuela to Seattle Washington in 2002. With the Yodeling dominatrix and a dozen other characters she quickly became a permanent member of the Zinzanni cast.

In 2005, she acquired her SAG membership with an appearance in the movie "Rent." Performing until she was 8 months pregnant, Manuela took a short break with her daughter Louise (Lou Lou). She returned to the mirrored "spiegl" tents of Europe in 2007 with the dinner cirque company Palazzo. After her second child, Maximilian was born in 2008 she performed with Palazzo in Frankfurt.

The TV show "America's Got Talent" found Manuela in 2009 and inspired her to expand her repertoire. Manuela is currently recording three albums, an Oktoberfest party album, an Alpine Rock comedy album, and a tribute album to the classic yodels of her childhood. She is also performing at Oktoberfests and Corporate Events across America.